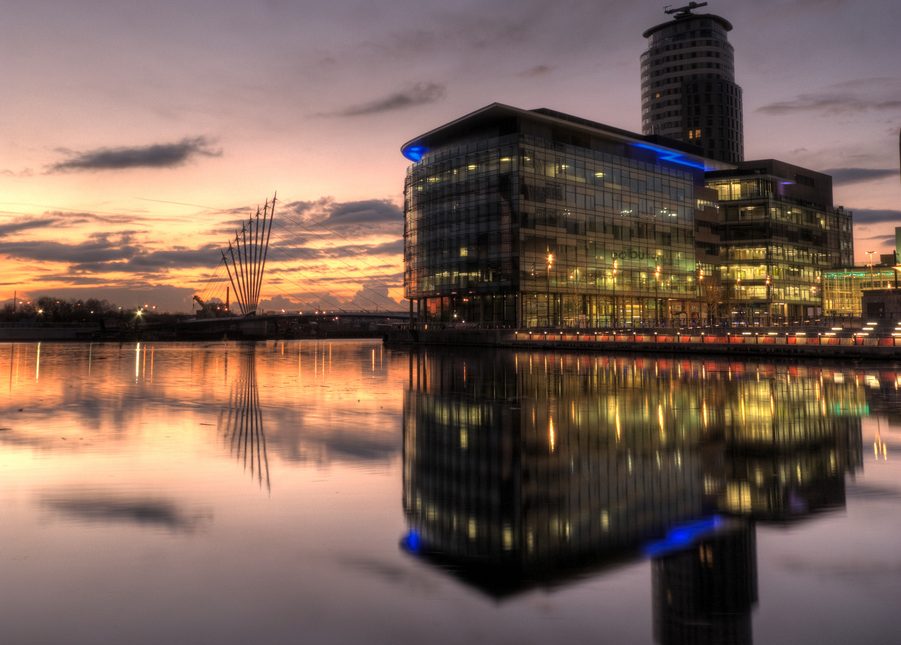 Manchester, the English city that gave the world Manchester United Football Club, split the atom and invented the screw thread, is a boomtown. Its phenomenal economic growth rate puts most of Europe to shame.

Yet real estate investors love it because it feels safe. Whilst the European Union grows at 1.2% to 1.4% a year, and the UK by 1.7%, Manchester grows by that much each quarter (and some parts of the city appreciably faster). Official data lags behind economic reality, which is assumed to be a fairly steady 5% to 7% GVA growth annually, according to the Centre for Economics and Business Research.

The rate of business formation, and rate of growth of existing businesses are way above the national trend, largely thanks to the tech sector. It is no surprise that the property business has been moving in fast.

Is Manchester that strange thing, a defensive play that is also a red-hot prospect? A home for patient capital and at the same time the scene of a gold rush? In the past five years, the city has burst on to the radar of overseas investors, and become one of the UK cities domestic institutions still favour. Like every boomtown, it has its detractors and its challenges, but Manchester remains a city success story others around the world are looking to as an example, and global real estate is taking note.

Data from Deloitte Real Estate in the UK, and from Rider Levett Bucknall in the U.S., show Manchester has more skyscraper development than any North American city except Toronto.

Manchester's tower crane count reached a record 64 last summer, and the skyline is still dominated by the 50-storey plus skysrapers that they are building.

Much of this is paid for with overseas money. Total volumes of international capital diverting to Manchester are hard to judge. Residential apartment sales in the Far East are almost impossible to quantify, but developers still beat a path to Singapore and Hong Kong with new schemes for sale. Global investment into commercial property is much easier to measure, and paints a picture of success.

Exclusive research for Bisnow by Savills shows the tip of a very large iceberg of overseas investment in the city by analysing overseas interest in the commercial property sector.

Just shy of £2B was invested by overseas buyers in commercial property in the conurbation's central districts 2015-2019, Savills said. It compares to just £877M in the previous five year period. The medium-term average suggests 25% of the total investment spending comes from overseas, but in some years it is much higher — up to 52% in 2016, before the Brexit crisis choked off spending.

"The volume of overseas capital coming to Manchester is rising steeply, year by year," Savills Investment Director Oliver Foster said. "Volumes grew 145% between 2015 and 2019, compared to the previous five years, so there's a sharply growing trend."

The Savills research raises three questions. Is Manchester’s property market about to surf Brexit disruption, or to be overwhelmed by it? How far is investment in Manchester a gold rush trip to the wild (North) West? Or is Manchester, as many UK funds argue, the ultimate safe bet?

These are uncertain times, thanks not just to Brexit but also to the rising risks of a China-U.S. trade war, of something nasty undermining the Chinese economy, of gravity finally hitting global asset prices, and of an economic cycle close to its end. Why risk investing in a boomtown when the obvious play is a safe one somewhere else?

This is the Manchester office market’s strong card, according to those who watch its markets most closely, who say Manchester is a defensive play. Compared to roller-coaster London, Manchester is a smooth ride. And unlike other UK regional cities, it is a large, liquid market.

First, some numbers. Manchester's office market is comfortably the biggest outside London, it terms of volume and value. Total take-up in 2018 was 2.9M SF, of which 1.75M SF was in the city centre. Top rents are around £35 to £37 per SF, and yields hover a little over 4%.

“If you are investing for the first time in the UK, of course you go to London. But once you are comfortable, you look at the regions, and the first port of call is Manchester,” Savills’ Foster said.

The key evidence comes from UK’s pension and insurance funds, patient capital that seeks long-term returns and does not enjoy surprises. UK institutional investors are rethinking their UK regional investment strategy. Each has a different approach but the core is a decision to invest heavily in a handful of key cities with the aim of creating a mutually reinforcing portfolio (the office investment supports demand for the residential investments which support the shops, and hence the warehouse investments).

The outcome should be a sustainable, long-term play which yields returns in a rapidly changing world because the cities in which they have invested are those mostly likely to make it successfully through the many challenges the UK economy will face.

Legal & General and Aviva have both signalled this strategy, buying into office blocks, build-to-rent multifamily apartments and modern warehousing in Manchester. This month M&G Real Estate named Manchester its second most 'vital' city for real estate investment, behind Edinburgh.

In Aviva’s case, Manchester is one of four favoured locations along with London, Cambridge and Birmingham.

Schroders Real Estate are recent big buyers in Manchester, and it is likely to buy again. In 2014, just as the Manchester boom was finding its feet, it paid £132M, reflecting a net initial yield of 7%, for the 615K SF 30-storey City Tower at  Piccadilly, Manchester. In 2017 they paid around £200M, a yield of 5%, for the 300K SF office block at No 1 Spinningfield.

“We have a strategy of investing in winning cities. Manchester is clearly on our list of winning cities,” Schroder Real Estate Investment Manager Rob Cosslett said. “There’s good economic growth, based on a strong university sector and high talent retention, affordable housing for that talent close to the centre of town, an active and engaged local council and lots of visitors, not just because of the football clubs Manchester City and Manchester United, but because this is a city with plenty of culture and a great sense of place.”

Schroders has seen rapid rental growth since acquiring City Tower, and are now tweaking the amenity offer hoping to set off a second phase of growth. The appraisal is based on rental uplift of 5% to 7%.

Yes, Brexit has hurt the office market Cosslett said, but investing in Manchester offices is the opposite of a risk. Amazon recently signed up for a 90K SF base, its only regional HQ outside London, and the list of  2019 deals is a long one, despite a year in which Brexit took its toll.

First half take-up was 1.2M SF, with demand kangerooing up and down as various Brexit deadlines came and went. By the end of the year the total will be close to 2018's 2.8M SF thanks to strong demand, with around 1M SF of known requirements currently in the market and expected to land before Christmas. These are roughly split between growth in indigenous companies and new arrivals from London.

“This year we’ve seen more caution from tenants, which is probably due to Brexit. We’ve seen longer viewing lists than we’ve ever had before, but the viewings do not turn into deals. Many occupiers are pausing decisions,” Cosslett says.

“Of course there are risks everywhere, but we think they are minimised in Manchester. The sheer willingness of London corporates to relocate here is proof on its own, add the city’s tech excellence, and unlike London the affordable rents, from £35-37 per SF down to £15-20 per SF, and it’s a great place for business to grow.”

So much for the long-term stability of the Manchester office market, but how do the boomtown’s many residential skyscrapers rate? Good bets or big risks? Official population projections show the extent of the opportunity for city centre residential. Manchester has dramatically reversed its previous downward trend in city population, up 28% 2001-2011, and projected to grow by another 29% 2011-2025. Greater Manchester (which includes the city and its nine neighbouring boroughs) is also rising fast against the trend.

More dramatically, the population of the five city centre wards is expected to grow by 25% in the years to 2025, and by 41% to 2030. Three of those wards will grow much faster: Deansgate (63%), Arwich (62%) and Piccadilly (61%), boosted in Piccadilly's case by the mighty Portugal Street East scheme. These are the wards (along with a handful in neighbouring Salford) where much of the skyscraper residential development is concentrated.

Manchester will not be every investor's ideal location. But if it can please both those who have an appetite for risk, and those who don't, and offer each of them the prospect of growth, it is sure to attract overseas attention.